'The currency's strength affects the economy in two main ways: It holds back economic growth by reducing the competitiveness of U.S. exports while depressing inflation by pushing down import prices.

Not only is the dollar's rise reducing price pressures, making it harder for the Fed to tighten, it's also acting as an "economic headwind reducing the need to tighten," said Lou Crandall, chief economist at Wrightson ICAP LLC in Jersey City, New Jersey.

The FOMC made a nod to the dollar's impact on the economy in its policy statement, noting that export growth has weakened. Yellen was more explicit in her press conference, saying that exports would be a "notable drag" on growth this year and tying that to the strength of the dollar, which she said partly reflected the strength of the U.S. economy.

Yellen said the currency's rise was also "holding down import prices and, at least on a transitory basis at this point, pushing inflation down."

"The Fed sees the stronger dollar as effectively tightening conditions in the U.S.," said Jonathan Wright, a professor at Johns Hopkins University in Baltimore and a former economist at the Fed's Division of Monetary Affairs. "They are worried about what will happen to the dollar and financial markets when the Fed starts tightening with much of the rest of the world at negative interest rates." '

Posted by John Coffey at 5:41 PM No comments: 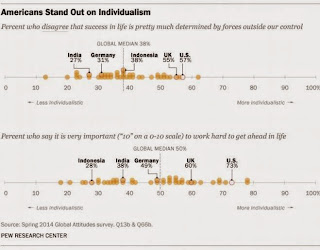 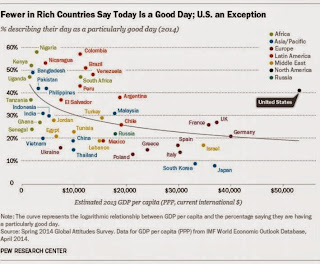 'it's necessary to go back a decade to 2005, when the production-maximizing strategy was first adopted. At that time, Big Oil faced a critical juncture. On the one hand, many existing oil fields were being depleted at a torrid pace, leading experts to predict an imminent "peak" in global oil production, followed by an irreversible decline; on the other, rapid economic growth in China, India, and other developing nations was pushing demand for fossil fuels into the stratosphere..

A "Brave New World" of Tough Oil
No one better captured that moment than David O'Reilly, the chairman and CEO of Chevron. "Our industry is at a strategic inflection point, a unique place in our history," he told a gathering of oil executives that February. "The most visible element of this new equation," he explained in what some observers dubbed his "Brave New World" address, "is that relative to demand, oil is no longer in plentiful supply." Even though China was sucking up oil, coal, and natural gas supplies at a staggering rate, he had a message for that country and the world: "The era of easy access to energy is over."
To prosper in such an environment, O'Reilly explained, the oil industry would have to adopt a new strategy. It would have to look beyond the easy-to-reach sources that had powered it in the past and make massive investments in the extraction of what the industry calls "unconventional oil" and what I labeled at the time "tough oil": resources located far offshore, in the threatening environments of the far north, in politically dangerous places like Iraq, or in unyielding rock formations like shale. "Increasingly," O'Reilly insisted, "future supplies will have to be found in ultradeep water and other remote areas, development projects that will ultimately require new technology and trillions of dollars of investment in new infrastructure."
For top industry officials like O'Reilly, it seemed evident that Big Oil had no choice in the matter. It would have to invest those needed trillions in tough-oil projects or lose ground to other sources of energy, drying up its stream of profits. True, the cost of extracting unconventional oil would be much greater than from easier-to-reach conventional reserves (not to mention more environmentally hazardous), but that would be the world's problem, not theirs. "Collectively, we are stepping up to this challenge," O'Reilly declared. "The industry is making significant investments to build additional capacity for future production."
On this basis, Chevron, Exxon, Royal Dutch Shell, and other major firms indeed invested enormous amounts of money and resources in a growing unconventional oil and gas race, an extraordinary saga I described in my book The Race for What's Left. Some, including Chevron and Shell, started drilling in the deep waters of the Gulf of Mexico; others, including Exxon, commenced operations in the Arctic and eastern Siberia. Virtually every one of them began exploiting U.S. shale reserves via hydro-fracking.
Over the Cliff
By the end of the first decade of this century, Big Oil was united in its embrace of its new production-maximizing, drill-baby-drill approach. It made the necessary investments, perfected new technology for extracting tough oil, and did indeed triumph over the decline of existing, "easy oil" deposits. In those years, it managed to ramp up production in remarkable ways, bringing ever more hard-to-reach oil reservoirs online.
According to the Energy Information Administration (EIA) of the U.S. Department of Energy, world oil production rose from 85.1 million barrels per day in 2005 to 92.9 million in 2014, despite the continuing decline of many legacy fields in North America and the Middle East. Claiming that industry investments in new drilling technologies had vanquished the specter of oil scarcity, BP's latest CEO, Bob Dudley, assured the world only a year ago that Big Oil was going places and the only thing that had "peaked" was "the theory of peak oil."'
http://www.realclearworld.com/articles/2015/03/20/why_the_oil_price_is_really_collapsing_111061-2.html

The amazing portfolio that costs less than an iPad - MarketWatch

http://www.marketwatch.com/story/the-amazing-portfolio-that-costs-less-than-an-ipad-2015-03-12
Posted by John Coffey at 9:41 PM No comments:

'This exam, given in 23 countries, assessed the thinking abilities and workplace skills of adults. It focused on literacy, math and technological problem-solving. The goal was to figure out how prepared people are to work in a complex, modern society.

That might even be an understatement, given the extent of the American shortcomings. No matter how you sliced the data – by class, by race, by education – young Americans were laggards compared to their international peers. In every subject, U.S. millennials ranked at the bottom or very close to it, according to a new study by testing company ETS.

"We were taken aback," said ETS researcher Anita Sands. "We tend to think millennials are really savvy in this area. But that's not what we are seeing."

The test is called the PIAAC test. It was developed by the Organization for Economic Co-operation and Development, better known as the OECD. The test was meant to assess adult skill levels. It was administered worldwide to people ages 16 to 65. The results came out two years ago and barely caused a ripple. But recently ETS went back and delved into the data to look at how  millennials did as a group. After all, they're the future – and, in America, they're poised to claim the title of largest generation from the baby boomers.

U.S. millennials, defined as people 16 to 34 years old, were supposed to be different. They're digital natives. They get it. High achievement is part of their makeup. But the ETS study found signs of trouble, with its authors warning that the nation was at a crossroads: "We can decide to accept the current levels of mediocrity and inequality or we can decide to address the skills challenge head on."

The challenge is that, in literacy, U.S. millennials scored higher than only three countries.

In technical problem-saving, they were second from the bottom.

"Abysmal," noted ETS researcher Madeline Goodman. "There was just no place where we performed well."'

Census Bureau estimates of median "money income," on the other hand, do not account for taxes, so they miss a major source of improved living standards. They also exclude realized capital gains, public and private health insurance, food stamps and other in-kind benefits. Even so, the Census Bureau's flawed estimate of median income rose 13.7% from 1984 to 2007 before falling 8% from 2007 to 2013.

In their original 2003 study, Messrs. Piketty and Saez mentioned one rapidly expanding source of missing income—disappearing dividends in tax-return data. These were "due mostly to the growth of funded pension plans and retirement savings accounts through which individuals receive dividends that are never reported as dividends on income tax returns."

The same is true of interest and capital gains accumulating inside such tax-free savings accounts. These have grown to nearly $20 trillion, according to a 2014 report by Tax Foundation economist Alan Cole.

Messrs. Piketty and Saez shrink the total income numbers further by subtracting all transfer payments, such as Social Security and unemployment benefits, and excluding all health and retirement benefits provided by private employers or government agencies. The result, as Brookings Institution's Gary Burtless noted, is that, "The Piketty-Saez measure [of total income] excluded 24% of NIPA [National Income and Product Accounts] 'personal income' in 1970, but it excluded 37% of 'personal income' in 2008." It excluded 40% of personal income by 2011. '